Tokyo Golf Club originated from a proposal by Junnosuke Inoue (later to become vice president of the club) in 1913 to found a golf club of and by Japanese nationals (heretofore all golf clubs in Japan were founded by expatriate foreign residents). Inoue learned to play golf in New York in the late Meiji era. And his proposal for a new golf club, made after his return from New York, received full support from Aisuke Kabayama (later to become vice president) and Shinjuro Arakawa, and with the participation of additional investors, Tokyo Golf Club opened in Komazawa, Tokyo in 1914. Many golf lovers, Japanese as well as foreign residents, gathered at the Komazawa course, and the golf club was to play a key role in the development of golf in Japan. 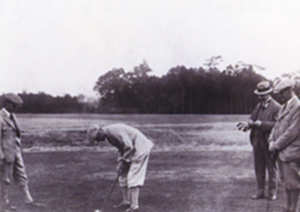 moved to Asaka in Saitama Prefecture

Since the Komazawa course was built on leased land, which was the source of many inconveniences, the club moved to Asaka in Saitama Prefecture in 1932. This move afforded the club with an opportunity and motivation to create what was to become a first class golf course in East Asia. The club invited course designer Mr. Charles Alison from Scotland and built a golf course of truly international championship caliber. The club made an epoch-making move to cover the entire golf course with bent grass, and an American architect Mr. Anthony Raymond was commissioned to design the Western style clubhouse.

Soon after, however, Japan went on war alert and the entire Asaka site was requisitioned and purchased by the Imperial Japanese Army. However, the legacy of the Asaka course lives on in Japan with the deep and large bunkers known as "Alison bunkers" named after the course architect. 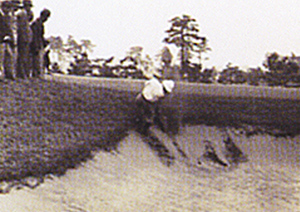 From Asaka to Sayama

The club suffered additional setbacks as the course was taken over by the Imperial Japanese Army before the end of World War II. After the war in 1946, the golf course was requisitioned by the U.S. Army as their recreational facility, and the members' ability to play on their own golf course became tightly restricted.

the course was returned to the club by the U.S. Army, and the normalcy of club life returned to its members.

In October, 1963, the club celebrated the 50th anniversary of its founding, inviting many distinguished guests from home and abroad. The occasion also celebrated the achievements of past and present members who played a major role in the club's rise to prominence and to the overall development of golf in Japan. 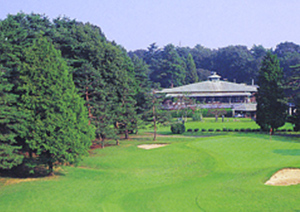